Moving is always a disruptive event even for adults. But for a young girl in school it can be especially traumatic. One day you’re in a comfortable place, in a familiar school with friends who know and like you; the next, everything’s different and you have to start over again. Definitely not something you want to do often. In Chevonne Mansfield’s young life, though, moves were all too common. In her elementary and middle school years alone, she moved five times to different locations on Long Island, attending multiple elementary and two middle schools. The way she overcame these disruptions and achieved academic and career success is a testimonial to her brains, strength, and the support of her family.

Chevonne was a child of teenage parents who separated when she was young. Nevertheless, her mother and grandmother continually impressed upon her the need to work hard in school and to get as much education as possible. She took this to heart and compiled an exemplary record in school. That, plus financial support for scholarships like the Bernie Scholarship Awards Program (BSAP), contributed in a big way to her success.

Her mother remarried when Chevonne was 12 and she eventually moved to Wheaton in Montgomery County where she enrolled at Albert Einstein High School. Her distributed family now includes 11 siblings­­—eight in Maryland and three in South Florida.

Ms. Mansfield was always willing to challenge herself in school. She had taken two honors courses in middle school in New York, and at Einstein and later at Watkins Mill HS in Gaithersburg, completed a number of Advanced Placement (AP) courses, including Spanish her favorite subject. Her combined HS GPA was 3.4, unweighted, with a weighted average of over 4.0.

She hoped to go back to New York for college­—still considering it as “home”—and was accepted and awarded a partial scholarship by St. John’s University (SJU) in 2000. Even with that aid, she still needed supplementary financial help to afford St. John’s where yearly tuition was over $20,000, even 16 years ago. In this early Internet era, getting information about scholarships was much harder to find than it is now. But a helpful guidance counselor at Watkins Mill tipped her off about the BSAP. Application processes were also paper-intensive, but Chevonne overcame these difficulties and eventually became a three-time Bernie Scholarship awardee. In addition, she received Pell grants and an NAACP scholarship and participated in a work-study program. The bottom line—and it’s impressive—is that Ms. Mansfield was able to get both her Bachelor’s and Master’s degrees without incurring a single cent of student loan debt.

Building on skills and credits earned in her HS Spanish AP course, Chevonne began as a Spanish major at St. John’s with the goal of becoming an interpreter at the United Nations. But she soon realized that working as an interpreter might not be her calling. One of her work-study assignments was in the SJU Athletic Department where she was introduced to the field of college sports management and displayed a natural affinity for it, leading to her eventual career field choice. She spent a semester abroad at the University of Leicester in the U.K. in a program dedicated to International Sports Management. While there, she helped organize, develop and implement a co-ed intramural basketball league.

Chevonne graduated from SJU in 2004 with a B.S. in Communications. She looked at a number of job possibilities—turning down an offer for an entry level position at a major TV network—but couldn’t find the right fit and instead took a Graduate Assistantship in the Athletic Department at the University of Maryland Eastern Shore (UMES) where she earned an M.S. in Criminal Justice in 2007, compiling a 3.9 GPA with just one B in three years.

Her Master’s degree in hand, Ms. Mansfield embarked on a series of increasingly more responsible jobs in collegiate sports information. From 2007 to 2010, she served as Assistant Sports Information Director (SID) at Howard University. From there she moved south to Birmingham, Alabama, her frequent childhood moves making the adjustment a bit easier. She worked as Assistant Director of Communications for the Southwestern Athletic Conference (SWAC) until 2011 when she landed the position of Assistant Director for Media Relations for the Southeastern Conference (SEC), one of the most successful and renowned conferences in the NCAA.

Her work at the SEC brought her attention from the founders of the newly formed American Athletic Conference, headquartered in Providence, Rhode Island, where she was appointed Director of Communications. The conference includes teams covering a broad geographic span of the country, from the U.S. Naval Academy and Temple University in the northeast, to Tulane University and the University of Houston in the south. One of its prominent members is the University of Connecticut Huskies whose women’s basketball team just established a new record with its 93rd consecutive victory.

This geographic dispersion of conference members presents unique circumstances in conveying a unified message to the media and the local communities. Chevonne has two assistants as direct reports. Her team is responsible for outreach PR to the media and conference communities and vendor management, and also is the contact for Women’s Basketball, Men’s Soccer, and Golf. In addition to her demanding job, she somehow found the “spare time” to teach a course in Sports Events and Facilities at Johnson and Wales University.

As her career has progressed, Ms. Mansfield has received a number of significant awards and distinctions, including:

§ Graduating from the NCAA Leadership Institute (one of 10 women and 22 overall);

§ Serving as a member of the Boards of Directors for CoSIDA and the Association for Women’s Sports Media;

§ Giving the keynote speech at the 2016 BSAP awards celebration; and

§ Serving as a panelist or moderator a host of national conferences or conventions, including the CoSIDA and AWSM conventions and the Sports Industry Networking and Career Conference.

One of Chevonne’s favorite quotes is from golf champion Jack Nicklaus: “Sometimes the biggest problem is in your head. You’ve got to believe.” That pretty much sums up the philosophy that has guided her life since childhood. Rather than complain about frequent moves and other distractions, she confronted and conquered all these challenges, and has already accomplished much both in education and in her career.

But stay tuned! We’ve probably just seen the tip of the iceberg as far as her achievements go. Ms. Mansfield is really a model for all future BSAP awardees to follow—someone who parlayed her talents, motivation, and drive first into a highly successful academic foundation and then into a rewarding career. 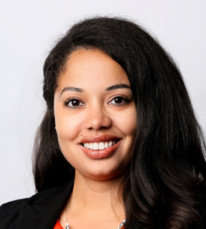